Overtaking records in F1: most overtakes in a race, by a driver and more

Not necessarily. Who could argue that watching Daniel Ricciardo cling on to win the Monaco Grand Prix in 2018 despite losing a chunk of power wasn’t compelling? The same could be said of Lewis Hamilton’s victory in the principality 12 months later, long after he’d radioed in to say his tyres were dead.

Sometimes defence can be just entertaining as attack. It is why Fernando Alonso’s battle with Michael Schumacher at the 2005 San Marino Grand Prix is the stuff of legend.

Even so, there’s nothing worse in F1 than a race where the order barely changes at all. It’s why DRS (Drag Reduction System) was introduced in 2011, which immediately led to record levels of overtaking and the most overtakes of any grand prix in history in the fourth race of the season.

Many believe DRS makes things too easy, and new rules coming in 2022 are designed to make it easier for cars to follow each other by reducing the amount of turbulent air in their wake. McLaren’s technical director James Key believes DRS will become “less influential” as a result of the changes. 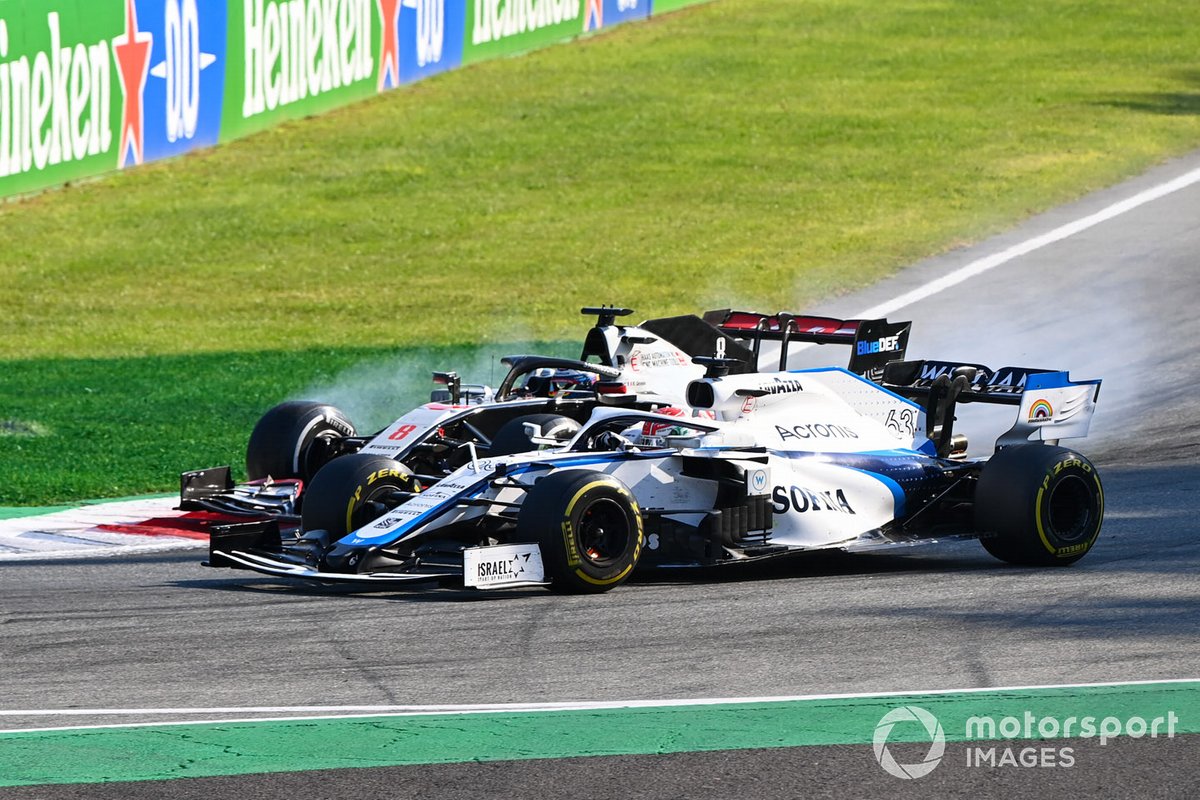 What is an overtake?

You might think an overtake is any occasion when one car passes another, but that’s not the definition used for analysing data. Firstly, an overtake has to take place on a flying lap, which means first-lap moves technically don’t count.

Secondly, any overtake must then be maintained all the way to the finish line on that lap, so if for example one car gets by another only to be immediately re-passed, that amounts to zero overtakes rather than two.

An overtake has to be for position, so lapping a backmarker or unlapping one of the frontrunners doesn’t count. And it also has to happen on track, meaning position changes as the result of pitstops aren’t real overtakes either.

The reason for all this is that it makes it easier to look back and compare what happened in old races by studying lap charts, which log the running order every time cars complete a lap. So you can tell when an overtake for a position has happened just by looking at the order of the field at any point during a race. 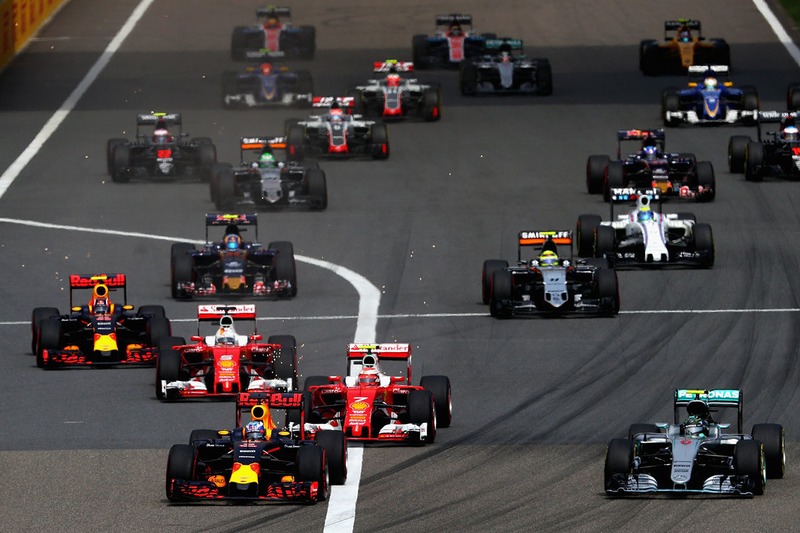 Unofficially, the 2016 Chinese Grand Prix saw the most overtakes of any dry race, with 161 passes for position as Nico Rosberg took the chequered flag for Mercedes. Part of the reason the figure was that high is that several of the fastest cars ended up near the back of the grid: Lewis Hamilton started at the rear after an MGU-H failure in qualifying, Kimi Raikkonen was forced to pit early for a new front wing after a collision which also pushed his Ferrari team-mate Sebastian Vettel down the order, and Daniel Ricciardo suffered a puncture while leading for Red Bull, eventually falling to 17th place.

It also helped that all 22 cars reached the finish, one of only a handful of grands prix in the history of F1 that have ended with no retirements whatsoever. The fact that everyone made it to the end boosted the number of overtakes that were there to be made.

The previous record holder is thought to be the Turkish Grand Prix in 2011, which saw 79 overtakes during the 58-lap race. This was just the fourth grand prix following the introduction of DRS, the overtaking aid that gives cars a speed boost by opening a flap on the rear wing. 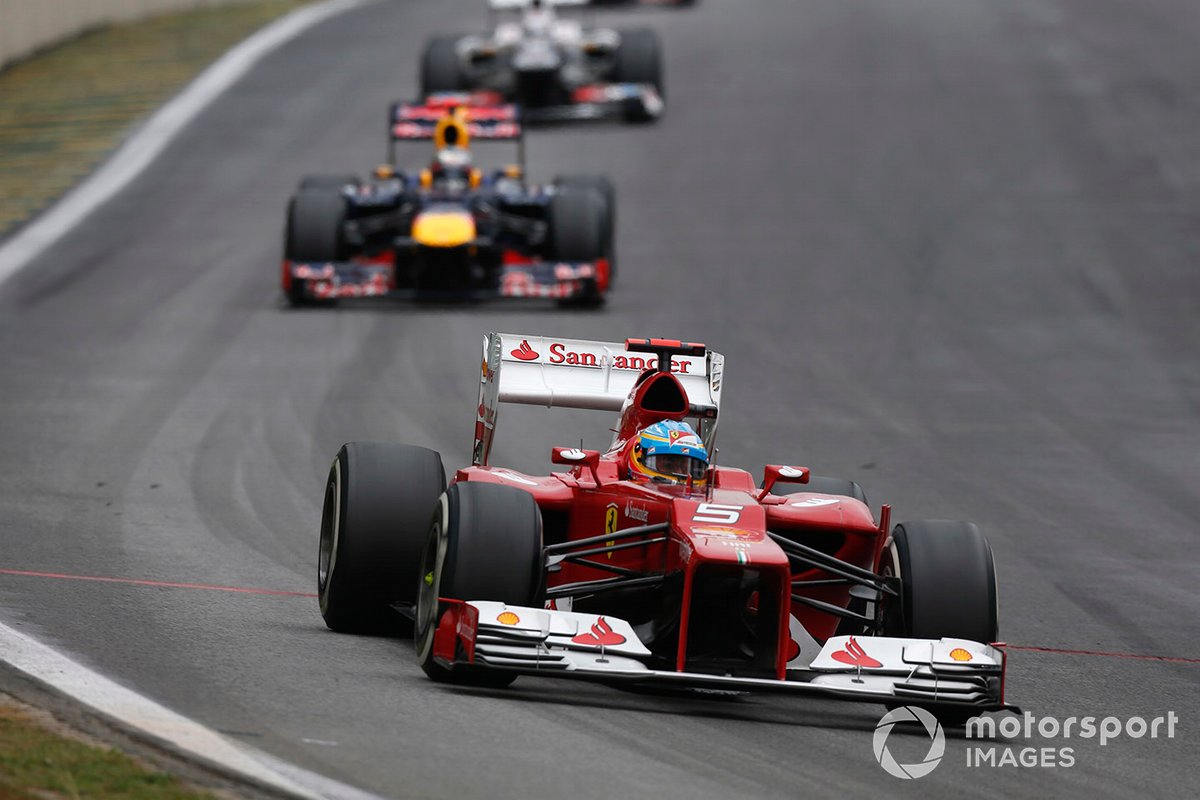 According to tyre supplier Pirelli there were 147 overtakes at the 2012 season finale at the Brazilian Grand Prix, the most of any rain-affected race. The conditions made the grand prix at Interlagos one of the most thrilling ever climaxes to a season, as championship leader Sebastian Vettel was spun around in the first lap and forced into an epic fightback to beat Ferrari’s Fernando Alonso to the title. With the Spaniard finishing second behind McLaren’s Jenson Button, sixth place was enough to hand Vettel his third consecutive crown, topping the standings by just three points.

The race was also notable for being the first to be led by Force India’s Nico Hulkenberg, who took the lead from Button on lap 18 and relinquished it to Lewis Hamilton 30 laps later after a spin. On lap 54 the pair collided in Turn 1, taking both out of contention for the win.

With a grandstand finish in sight, Paul di Resta’s crash three laps from the finish saw the race and championship battle finish behind the safety car. 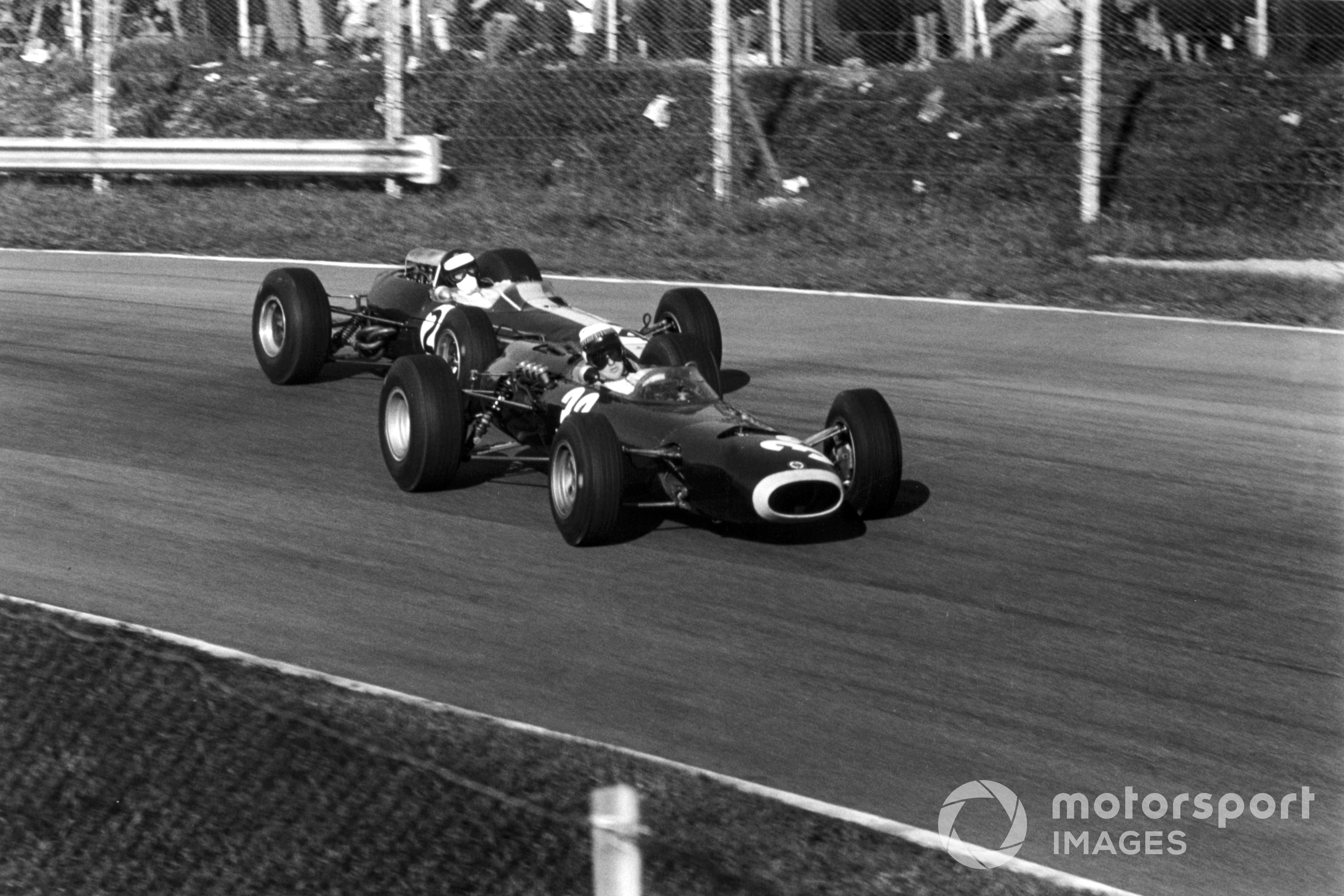 The 1965 Italian Grand Prix at Monza is thought to have seen the most overtakes for the lead of any F1 championship race in history, with first place changing hands a whopping 41 times over the 76-lap event. Four British drivers – Jackie Stewart, Graham Hill, Jim Clark and John Surtees – all traded the lead for BRM, Lotus and Ferrari respectively largely thanks to the powerful effect of slipstreaming at the high-speed circuit.

Eventually Stewart prevailed, just over three seconds ahead of BRM team-mate Hill. Clark and Surtees both retired with mechanical issues. 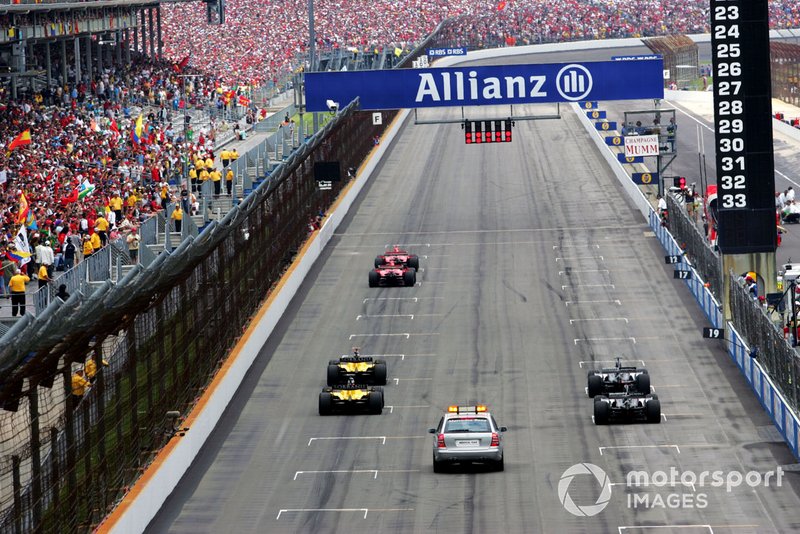 The start of the race with only six cars

Since 1950 there have only been three races which have featured no overtakes whatsoever. All three came in a period of six years, bookended by the Monaco Grand Prix in 2003 and the European Grand Prix in Valencia in 2009.

The 2005 US Grand Prix at Indianapolis is infamous for only having six cars contest the race. The entire field bar Ferrari, Jordan and Minardi withdrew from the race at the end of the formation lap after a political fallout caused by a series of Michelin tyre failures in practice. Unable to guarantee the drivers’ safety or find a compromise with the teams running Bridgestone tyres, the Michelin teams chose not to contest the race, much to the fury of the thousands of fans in attendance.

The Russian Grand Prix came close to repeating the feat in 2017: as Valtteri Bottas won the first F1 race of his career, the fans were treated to just a single overtake over the 52-lap event. 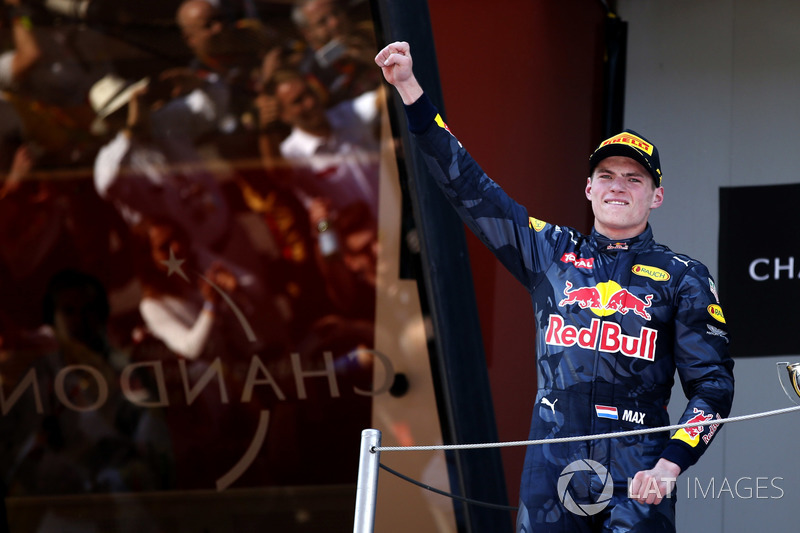 2016 was a big year for Max Verstappen: promoted from Toro Rosso to Red Bull early in the season, the Dutch driver won the Spanish Grand Prix on his debut after Mercedes team-mates Nico Rosberg and Lewis Hamilton took each other out on the opening lap. Verstappen – who was still only 18 at the time – drove like a seasoned pro to fend off Kimi Raikkonen on a two-stop strategy.

According to data compiled by Pirelli at the end of the season, Verstappen amassed 78 overtakes over the 21-race calendar; 18 for Toro Rosso and 60 for Red Bull, averaging 3.7 per race. Meanwhile team-mate Daniel Ricciardo managed 61 overtakes, which would have been an all-time record in itself had it not been for the teenage sensation. 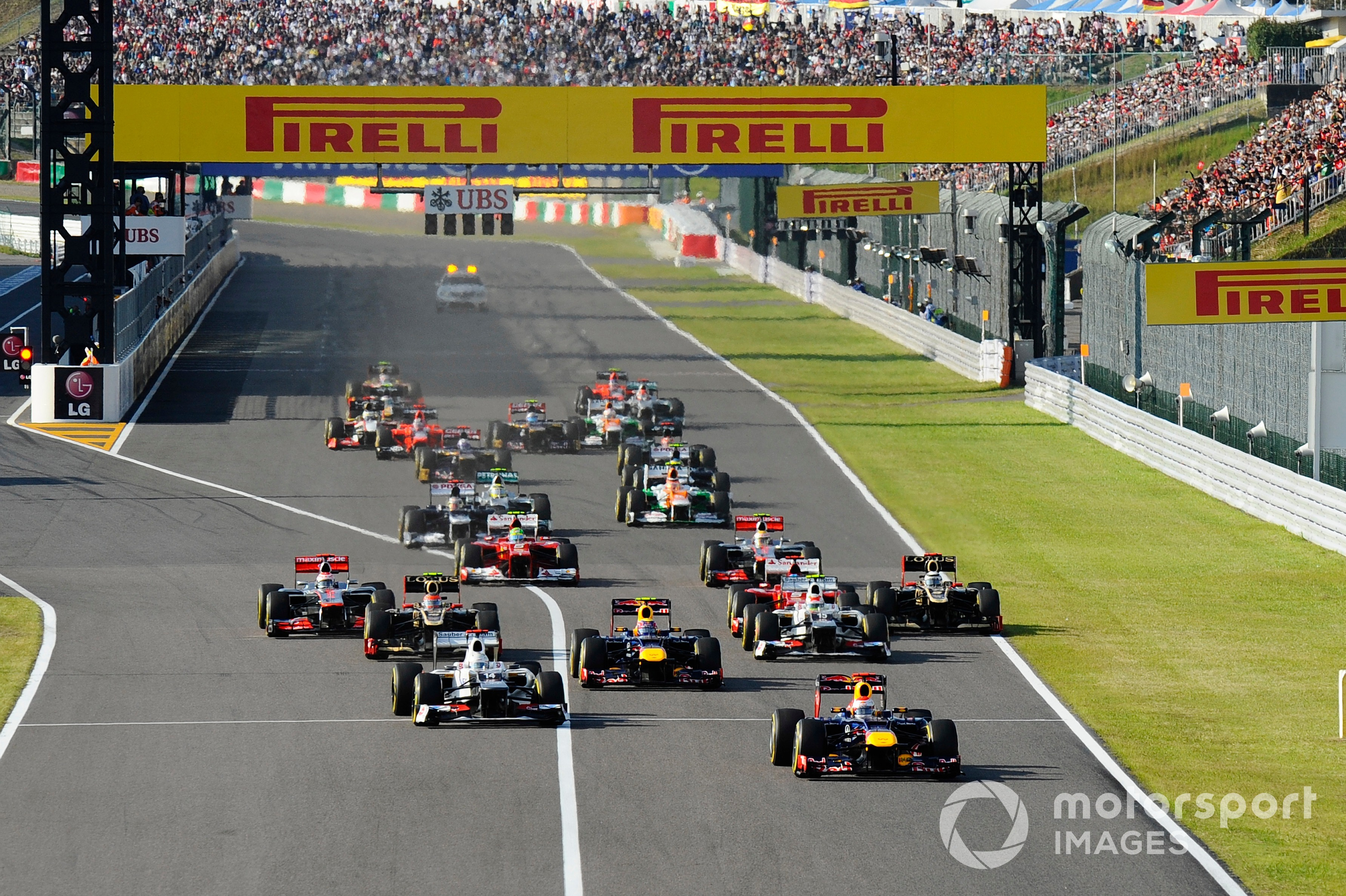 Sebastian Vettel, Red Bull Racing RB8, leads at the start of the race at the 2012 Japanese GP

It wasn’t just Max Verstappen who was out to make moves stick in 2016. The entire grid combined for a grand total of 866 overtakes during the 21-race campaign, more than any other year in F1 bar one.
But the outright record belongs to the 2012 season, which saw 870 overtakes completed at an average of 43.5 per grand prix over the 20-race calendar. That’s slightly more than the 43.2 average of 2011, when DRS was used for the first time.

The overtaking average in F1 fell noticeably in 1994 when refuelling was reintroduced, with the 18.1 overtakes per race well down on the 24.5 that had been seen the year before. The average hovered around the low- to mid-teens until the refuelling was banned for the start of the 2010 season, in which the average immediately climbed from 13.2 overtakes per race in 2009 to 23.8 in 2010.

Bottas: Certainty over F1 future helping me focus on driving